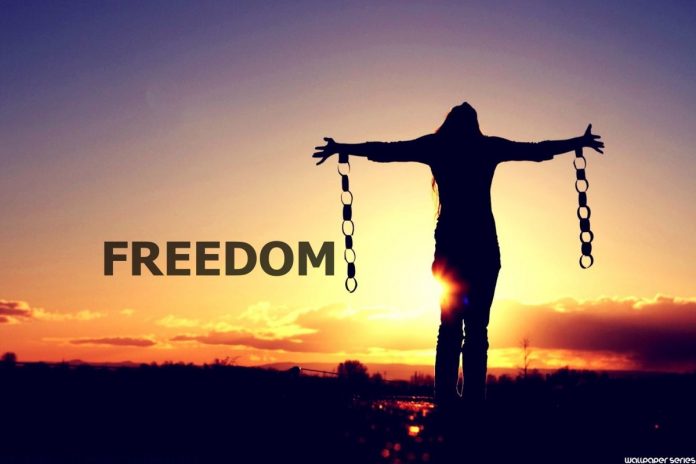 Today is a day that many Americans take for granted. I probably did myself–once upon a time–but not any longer. Once you have had your freedom taken or restricted, nothing feels better than celebrating it.

I manage several Facebook support groups for those who have loved ones in prison and/or have been to prison themselves. Many others join the group because they are headed to prison. They seek information, like I once did. They come to the group with anxiety and concerns about what lies ahead of them. I remember well the feeling of having prison held over my head. Thankfully, I am now over two years post release from prison. But the memories of my days locked up have not faded.

This week I posed the question, “What does FREEDOM mean to you?”, in several of the Facebook support groups. Many of the answers were as expected, especially given that many of the participants of those groups have been wearing an ankle monitor for over two years now, due to being released on the CARES Act. One person answered “Being able to do what I want as long as I’m abiding by the laws set for us but also being able to make my own choices for myself not one’s forced on me.” Another chimed in “The ability to open doors and pass through them as I please. When I first got out of Prison I would just open and close the closest door to me when I was frustrated. It may sound crazy but it helped remind me that things could be worse. Also freedom is driving with my windows down, wind blowing my hair like crazy. These two things are the simple things I missed the most while incarcerated. 15 years later, I refuse to take these things for granted.”

Others reflected on their time in prison, with comments such as, “No more boiled eggs, pancakes, and oatmeal every Saturday”, “or mushy French Toast.” One person remembered how they found their freedom inside those walls, “Freedom means everything to me, but I got my freedom inside those proverbial walls at Bryan, God gave me my freedom.” And yet one poster focused on one of the hot issues in the country today, the continued war on drugs, by posting that freedom means “Ending the war on drugs and releasing all inmates serving time for drug offenses.”

I often reflect back on the holidays I spent in prison. Regardless of how bad they were, we made the best of them. I honestly have many fond memories celebrating with other ladies I met in prison. Now on holidays, I wonder what the prisoners are being fed, and if the food is even edible? I think about the women I left behind at FPC Bryan–the federal prison camp I served two years of my time, located in Bryan, Texas. I am aware that they currently have no air conditioning, as the units constantly go out in the summer, due to age and need for repairs. The high today is supposed to be 101 degrees there. I remember suffering through extremely hot days with no air myself, during my stay there in 2018-2019. It was miserable, with no windows to open, and only a few fans brought in to blow hot air. I was on the second floor and no air would reach our rooms. I recall one morning around 3:00 a.m., sitting on my bunk praying, because I honestly believed I was going to die. The air was so hot and thick I could not breath.

And for the life of me, I can’t understand why the prison has not fixed this issue? It appears that the prison has had plenty of time and money to do so. After all, new gators for the staff to ride around the compound on, continue to show up each year. There is a new fence around the Warden’s White House, that is rumored to have cost over $300,000. And staff continue to have cook outs and other parties, funded by prison funds.

I also worry about prisoners throughout the prison system, who have now spent over two years being locked down due to COVID. Many forced to just sit in cells, with very little time out. Caged like animals at a zoo, with nothing but time on their hands. Many not being able to program or do productive activities to earn First Step Act Earned Time Credits, that would allow them to leave prison early. I spent only three months in those conditions in early 2020, and I still have anxiety from what I went through. Yet, here we are over two years later and others are still being subjected to such conditions. I worry about the mental health of all involved.

The Bureau of Prisons (BOP) continuing to thwart the will of Congress at every turn. All of these examples, highlighting an even larger issue, the inhumane treatment of prisoners in our country, both state and federal. It is no wonder the cycle just keeps repeating itself. How can a civil society expect to lock people up, mistreat them, do nothing to rehabilitate them, not provide them with proper nutrition or medical care, much less needed psychological care, and then expect them to walk out of prison a better person…but I digress…as that is a topic that could fill up many blog posts.

Today, as our nation celebrates FREEDOM, will you join me in praying for my brothers and sisters still trapped behind those walls? As I celebrate my FREEDOM, I can’t help but remember that I once had that very freedom taken from me. I survived many hard days in prison. Yet here I sit today, stronger and more resilient than ever. I found my voice because of the journey I took through our criminal “in”justice system. Won’t you find yours, and help me fight for FREEDOM for all, as well as for needed changes to our criminal justice system?

Happy 4th of July y’all. Until next time…

© 2022 Copyright – Lynn Espejo, All rights reserved. You cannot print or use any of the content without written consent.