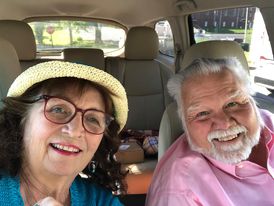 Over 4,000 returning citizens still sit in the balance–waiting to see if they will be returned to prison when the pandemic ends.  Individuals that have rebuilt their lives while out serving the remainder of their sentence on home confinement under the Cares Act.

The question remains, will President Biden grant clemency to these individuals, and if not, will he authorize one of the largest days of mass incarceration in the history of this country?  Advocates are urging the Biden Administration to act now.

Many who were released under the Cares Act, have now finished their prison sentence and are no longer under the constraints of an ankle monitor or half-way houses across the country.  These individuals are also speaking out–discussing how easy it is to be violated by the half-way house that oversees those released under this act.  One of these individuals, Retta Sundblad, tells her story below.  She speaks about the success of those released under the Cares Act, and how this success should be used as a guide for criminal justice reform in the future.  #KeepThemHome

On April 23, 2020, I was the first woman released from FMC Carswell Camp to home confinement under the CARES Act.  I had served 32 months on a 51-month sentence for mail fraud.  I was 63-years old at the time and had chronic medical conditions, which necessitated using a walker to ambulate.

My son and his family picked me up at the gate and transported me to DFW airport for a flight to Charlotte, North Carolina.  I was picked up by my husband of 40 years, to be taken to the halfway house in Greenville, South Carolina.

When we arrived at the halfway house, I was outfitted with an ankle monitor and given strict instructions on the rules, I needed to conform to in order to stay in compliance with the Bureau of Prisons.  Due to the pandemic, I was informed that I would only be allowed to leave the house for medical reasons.  I was not allowed to attend church, shop for clothes or groceries or hygiene items.  I was not allowed any social passes.  I was only allowed to go to medical appointments.

I felt sure that as the country began to open up, that these restrictions would lift.  This was not to be.  For fifty weeks, I stayed in my home, calling to get permission to go out on the porch or to the garage.  I was awakened during the night to confirm that I was at the house, despite the fact that I was wearing an ankle monitor.  I was scared to take my medications that would allow me to sleep for fear of missing a phone call.

One day, I was on the phone with the social security administration for about an hour.  After I hung up, I was called by the halfway house, asking where I had been.  I said that I was right where I was supposed to be.  They asked why I had not answered the phone and I told them I had been on the telephone with social security.  They told me that they were about to put out an escape charge on me.  When I had the landline hooked up, I was told that you could not have anything on the phone that would let you know someone was trying to call in.  My anxiety went into full blown panic attack.  I made sure to never use that phone for any calls.

My halfway house was very good about my medical care.  My appointments were set up in a timely manner and my medications were filled promptly.  They approved physical therapy to offset the damage due to months of incarceration.  I was able to finally walk without assistance.

In January, I went on a low carbohydrate diet.  During a routine urinalysis, I was informed that alcohol had shown up on the testing.  I was dumbfounded since I do not drink and had not consumed alcohol since I was 21.  I went to my doctor, who noted my weight loss and said that being in ketosis would show alcohol on a urine test.  I immediately stopped the diet, for fear of getting an incident report.

I cared for my 86-year-old mother while she had Covid.  I assisted my diabetic husband with tasks that he was no longer able to perform.  I continued my studies for my master’s program in Christian counseling.  I became meaningful to my family once again.

After fifty weeks of home confinement, I was released to community supervision.  I am one of the lucky ones who does not have to worry whether the BOP will call me back after reintegrating into my life outside bars.  I am on the next step of my journey.

I believe that this was a wonderful grand experiment to see what happens when you let low risk, non-violent offenders serve their time in the community.  We have a great test group, and it has been successful.  Can we use this to talk to judges, prosecutors, and congress to see the sensibility of reducing mass incarceration?  The money saved by community corrections is just one of the benefits.  How will it change the lives of families to be keep intact?

We have a chance to make this a win in the criminal justice reform stage.  If these individuals were able to successfully complete their home confinement, how does that help society?  We have taxpayers, not tax bills.  We are not spending thousands of dollars to house the sick and elderly. We have families that are not decimated by incarceration.  We can hold our heads high as a society that uses common sense when dealing with crime.  This is one woman’s story.